Skip to content
AL: How different is the story that you heard from the people from the official version and the one in the media? 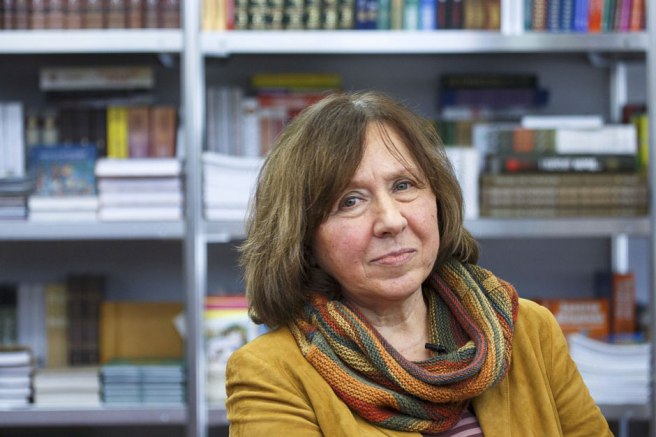 SA: The stories are completely different. We’ve always had this situation in Belorussia, and partly in Russia too, that the official version has little to do with how ordinary people see things. What is the main aim of the authorities? They always try hard to protect themselves. The totalitarian authorities of those days demonstrated it vividly: they were afraid of panic, they were afraid of the truth. Most people had little understanding of what was going on. In their attempts at self-preservation the authorities deceived the population. They assured the people that everything was under control, that there was no danger. Children were playing football in the yard, they ate ice cream in the street, toddlers played in sand boxes, and many people even sunbathed on the beach. Today hundreds of thousands of those children are invalids and many of them have died. Faced with the nuclear disaster at the time, people found themselves alone with the problem. People saw that the truth was hidden from them, that no one could help, neither scientists nor doctors. That situation was completely new for them. Take for example the firemen—they had themselves become like little reactors. Doctors undressed and examined them manually. Those doctors caught lethal radiation doses from them. Many of the firemen and doctors died later. The firemen did not even have special protection suits. They simply did not exist at the time. They arrived as if it were a usual fire. No one was prepared for this sort of thing. My interviewees told me real-life stories. For instance, in the few multistory houses in the town of Pripyat, before the evacuation started, people stood on their balconies watching the fire. They recall what a splendid sight it was, all crimson fluorescence. “It was the sight of death. But we never thought that death could look so beautiful.” They even called their children to admire the sight: “Come have a look. You’ll remember it to the end of your life.” They admired the sight of their own death. Those people were teachers and engineers from the nuclear station. People I talked to provided many such details about the scene of the disaster.
I remember two years later one helicopter pilot phoned me: “Please come and see me as soon as you can. I have little time left. I want to tell you what I know.” He was a doomed man when he was telling me his story. He said: “I’m glad you’ve come. I can talk to you about it. Please write it all down. We did not quite understand what was going on, and even today they still don’t understand.” I lived with the feeling that I must write it all down. Maybe people still don’t quite understand what happened then and that’s why it’s so important to record the actual evidence, the real history of Chernobyl, a history that hasn’t quite sunk in to this day.
Svetlana Alexandrovna Alexievich:-  (born 31 May 1948) is a Belarusian investigative journalist and non-fiction prose writer who writes in Russian. She was awarded the 2015 Nobel Prize in Literature “for her polyphonic writings, a monument to suffering and courage in our time” She is the first writer from Belarus to receive the award.
Source : http://www.dalkeyarchive.com/a-conv&#8230;